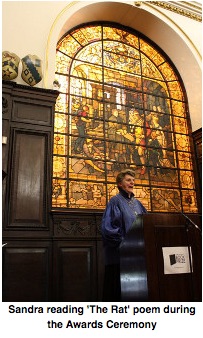 As publisher of Patrick Moore’s WITHIN THE GLADE Poems for Children of All Ages! (sadly, he had died in 2012), I was asked to represent him at The People’s Book Prize Awards Ceremony, in London in May 2013. He had been nominated as a finalist and, sadly, having died in 2012, could not be there himself.

It was a glittering, glamorous evening, held in the Stationers' Hall of The Worshipful Company of Stationers and Newspaper Makers in the City. Before the reception, I was filmed, talking about Sir Patrick, our long friendship, WITHIN THE GLADE and my own work as a poet and writer. (Click here to view the Awards Evening interview on YouTube: go to The People’ Book Prize 2013/Finalist interview with Sandra Saer.).

At dinner in the beautiful 17th Century banqueting hall. I sat between Orlando, my youngest son, escort for the evening, and Senior Pastor of Christ Church, Southampton (he had been announced with due pomp and ceremony to say The Grace) and Christopher McKane, a former Master of Stationers, and retired managing director of THE TIMES. With Chris, a stimulating and revealing conversation ensued!

It transpired that we had both started our careers as juniors on local newspapers.

In my case, it was the CHESTER CHRONICLE; in his, the OXFORD TIMES. 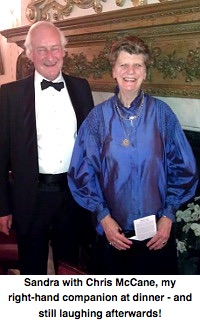 WITHIN THE GLADE did not win a prize, but I was invited during the awards ceremony to go up to the podium, to say a few words about Sir Patrick
(I managed to keep it brief!) and read one of his favourite poems from WITHIN THE GLADE: 'The Rat'. It was an appropriate posthumous honour for him, and the loud applause was gratifying, too!