In 1961, Michael Ramsey, a former Archbishop of Canterbury, went to Chichester Cathedral to dedicate the newly-rebuilt Arundel Screen, in memory of George Bell (1883-1958), one of the most outstanding Bishops of Chichester. (And, in my book, and in that of the 2000+ who signed a Petition to have his name cleared and his greatness reinstated, a Bishop forever to be remembered.) 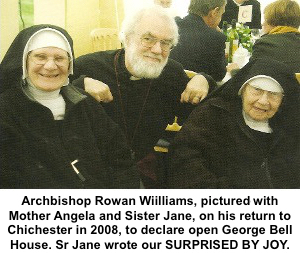 Why am I telling you this?

Now we go back in time again, to 2003. when a small package arrived in the post. It contained an exercise book crammed with small handwriting, accompanied by pony-camera photographs which had been glued tightly into the book. A note read: 'Would you like to publish my story ? Sister Jane.'

I went on to read a beautiful, heart-warming account of an Anglican Community's life and the devoted but joyful way the Sisters lived it. And of course I published it.

SURPRISED BY JOY A History of the Community of the Servants of the Cross This is a beautiful, heart-warming account . On the back cover, I quoted from theThe Rt Revd Eric W Kemp, Former Bishop of Chichester, 1974-2000, and Episcopal Visitor to the Community:

An admirable and encouraging story. I have known the Community since 1974. It has given long years of faithful service to the church, in various ways. The Sisters have been faithful to their calling, through many changes forced upon them by circumstances.

The other Arundel connection? In February, 2014, Rowan Williams, now known more correctly as The Rt Revd Dr and Rt Hon Baron Williams of Oystermouth, made a two-day, unforgettable visit to our Parish and Priory Church of St Nicholas.

He gave the second in the church's 'Poetry and Faith' series, this time on Dylan Thomas, illustrated with readings of his poems. Next day, he celebrated and preached the sermon at the 10 am Eucharist Service.

Needless to say, the church was packed on both days, and a great many people some, we had never seen before, (but hope to see again) had the opportunity to listen, learn, and thoroughly enjoy what the erudite but engaging Bishop said, with such charm and humour. Our Vicar, David Farrer (also a Bishop!) commented to me in an email, after the weekend, that 'the humble humanity of the man shines through'. That said it exactly!

Sadly, both Mother Angela and Sister Jane are no longer with us. Following Angela's death, Jane's Requiem Eucharist took place at The Church of St Mary the Virgin, in the Parish of East Preston and Kingston, on Friday, 13 February, 2015. The Celebrant was Bishop Martin Warner, the last Episcopal Visitor to the Community of the Servants of the Cross. It was a most moving occasion, for all the many of us present.